Home / Carpets and Rugs / Afghan rugs – the bold and beautiful 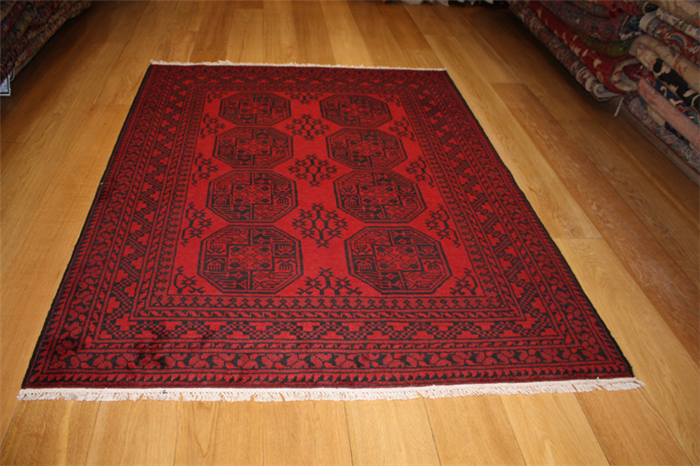 Afghan rugs – the bold and beautiful

Rugs come in various forms based on styles, materials, colors, patterns, etc. but what makes a rug truly unique is the history and the culture engraved in it. Afghan rugs, are the kings of the rugs in terms their bold colors and detailed craftsmanship. One could easily see the striking difference between the modern contemporary, mass produced rugs and the beautiful crafted, hand-made, afghan rugs. The fact that the rug grabs attention at the first sight says something about its stature.

So what is that makes these afghan rugs unique, one of its kind. Let’s dig into them.

The afghan rugs are special in one way that most of them are hand-made. There are machine-made afghan rugs too, however, if one wants to get something personal and unique, then a hand-made rug is often suggested. They bring out the craftiness of the weaver that they are known for.

The weavers implement different techniques like including crochet patterns in their rugs too. It’s this combination of different stitching techniques and weaving that makes the afghan rugs, one of its kind. The handmade rugs are also quite durable in terms of years, lasting up to 50 years, compared to machine made ones, which last up to 15 years. The afghan rugs have quite an importance culturally, whereby they are passed down from one generation to another.

When it comes to buying the afghan rugs, there are quite a few points to consider, and it is always suggested to get the advice from people experienced in this field. One of the major points to consider is the dye, if the rug has natural or synthetic dyes. It is suggested to opt for natural dye, as they have deeper impact in color and bring out the richness of the craftsmanship on the rugs. One point to remember here is, these dyes should be handled carefully, as they could bleed a lot in wet condition.

Apart from the dyes, the other important aspect of the afghan rug is the weaving itself. These differ in the way one could feel the rugs. There are some numbers in this case, number of knots per square inch that define if the rug is coarse or fine. This range is from 50 knots per inch (coarse) to 350 or more knots per inch (very fine). Generally 120-130 knots per inch is sufficient, but this is more of a personal preference.

Finally, the age old debate of choosing between traditional and modern artistry. Modern artistry is something which could be found quite easily. However, the impact of the afghan rugs lie in their heritage which is embedded in their rugs. Through a proper search one might even be able to find tribal rugs, which are unique to one particular tribe or province.

These are some of the facets that truly make the afghan rugs, one of its kind. They are available in the US through some dealers and also could be bought online, however, one needs to be careful of trickery.