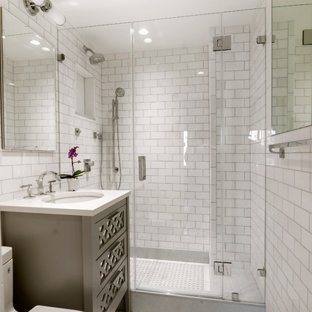 Do you want to give a classic look to your bathroom? Then you should go for subway tile bathroom. When you go for this tile, you will be giving a classical and almost-whimsical look to your bathroom, which is going to be irresistible. Ask about them to any interior designer. They will describe it as simple, elegant and sleek. If you are looking for an example, let me tell you that the basic 3×6 inch subway tile has a historic aspect to it. It was first used in the subway systems in New York, opened in 1904. The walls of tiles look give a brick-like appearance and they instantly become irresistible. They became popular because of the ease of installation, ease of maintenance and durability. Also, you can use them to bring out colorful mosaics designs by arranging them in a certain way. New subway tiles are installed in the tunnels every year to maintain the classic look. Also, it gives a cheerful and pleasant feel to the users. So you can use them in your bathroom as well.

As we have already seen, the subway tile bathroom is going to be an elegant space in your home. So let’s see the history behind these beautiful tiles. The history of these tiles goes back to the beginning of 20th century. The company owned by Heins&LaFarge played a big part in the introduction of these tiles. Artists named Christopher Grant LaFarge and George C. Heins were related to famous stained-glass artisan John LaFarge. All three played a big part in the ongoing Arts and Crafts movement then. They specialized in the Beaux-Arts architecture style. They changed the trends in 20th century and it ruled much of the century, or even today.

These two individuals worked closely with Rookwood Pottery and Grueby Faience Company. These companies were prolific companies which produced good quality tiles which could withstand the frequent scrubbing and cleaning. Also, these tiles were heavy-duty. They ended up designing motifs through the use of ceramic tiles as well. They also can take the credit for shaping the appearance of many subway stations scattered across New York. Today, subway tile bathroom is the best example of the evolution of these tiles.

Today, subway tiles have many other uses. They are used in kitchens as well as bathrooms. Many prefer subway tile bathroom these days all thanks to the beauty and class it brings. They are very popular these days due to number of reasons. First and foremost, they are resistant to stains. Ceramic has the natural ability to resist moisture. This is exactly why you can easily clean glazed and unglazed subway ceramic tiles. Also, they are perfect for hygiene sensitive areas such as kitchens, bathrooms and shower walls. They are very easy to clean and that is the main reason why many prefer them.