Home / Sofa / Couch beds; for when space is an issue 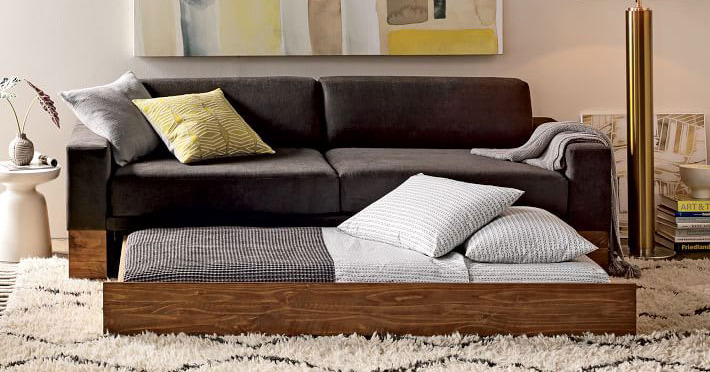 Couch beds; for when space is an issue

The couch beds are growing in popularity in recent times probably due to the functionality that it offers. There are many people who use this couch as it saves space, is comfortable and can add some style to the room as well. There are many people out there who use a couch bed as an extra bed for when friends and family come along to say hello. The couch bed might seem like a modern concept, but it has some history to it.

A bit of history on this furniture

The couch bed was used as far back as the Native Americans as well as the Egyptians, Greeks, Romans and Ancient Chinese. This furniture has been around for quite some time. It has to be pointed out that the concept and idea was similar, but the designs were quite different. The modern design of the couch bed has had some adjustments and tweaks to make it comfy and stylish. An instance where this furniture has been used is during the Medieval Times where the Royals would use this furniture. Back then, it was light weight and portable, so that the peasants would find it easy to move the furniture from castle to castle.

Why it works best in small spaces

There are some reasons as to why this furniture is best for small spaces. For starters, you don’t need a bed and couch separately as they all come in this one furniture thus some space is saved. In addition to that, there are some of the couch beds where the couch pillows can also function as sleeping pillows at night thus no need for extra storage space. We’ll agree that this is minimal space saving, but it can make a difference if you’re short on space.

Thanks to technology and the emergence of the contemporary styles, there are different kinds of couch beds. A simple search online will show you the varieties available. They come in different styles and designs, so rest assured that you’ll find something that suits you.